As BytePitch we have a considerable amount of work resource allocated for blockchain development ranging from a variety of frameworks. In this article we will go over a lending protocol we built on Agoric.

Introduction: What is Agoric?

Agoric is one of the platforms that BytePitch is building on. Agoric lives on the Cosmos network and has the capability to communicate with other Cosmos networks via IBC(Inter-Blockchain Communication) protocol.

How does Agoric work and what it brings to the table?

What's innovative about Agoric is that it aims to bring over 10 Million JavaScript developers out there to DeFi space. DeFi space has a lot of protocols/apps yet to be built to meet the market demand and bring the true power of blockchain to real life. Agoric plans to solve this problem by drawing JavaScript community to smart-contract development. However, in the mean time it doesn't let go the security aspect of blockchain technology which is so crucial to the decentralized applications. So Agoric introduced its own framework of JavaScript. This framework consists of four main parts;

There's also a concept worth mentioning which is the VAT. VAT is a piece of software that has its own message queue, a call stack of frames, and a heap of objects, much like the event loop concurrency model in web browsers and Node.js. In the Agoric VM (also called as ag-solo), there are multiple vats. VATs help us to isolate processes and enforce object-capabilities. Object-capabilities is an important part of Hardened JavaScript and also is a main component of the Agoric security model. For more in depth information about how Agoric achieves distributed secure JavaScript programming, please check out the official docs on the Agoric JavaScript Framework.

Lending and borrowing have always been one of the most crucial parts of world economy. Until now, banks have been the main institutions who took on this job. With the development of Web3 and blockchain technologies gaining more and more power, we now do not have to rely on banks to evaluate us as "low-risk" and provide us with the liquidity we need.

Compound Finance is one of the first protocols to successfully implement a pool based lending protocol. It lives on Ethereum network and currently has almost $4 billion locked into it and lent almost $1 billion.

The numbers above are correct at the time of writing this article and probably will change later.

How does Compound Finance work?

Users supply an asset to one of the existing pool and receive a cToken in return. For instance, if you supply ETH to the ETH pool you receive cETH in return. You can use this cETH to redeem your underlying, meaning ETH, assets later. There's an exchange rate between the underlying asset and the protocol asset in each pool, we'll cover that in detail later in this article.

There are two main incentives for supplying liquidity to the protocol;

We can extend the list but you get the idea. The banks ask these questions in order to evaluate you'll pay your debt or not. So it's a matter of risk calculation, if people do not pay their debts institutions who gave them the money will go bankrupt. There's quote that explains this situation very well, I believe:

So how does decentralized lending protocols like Compound not go bankrupt? How do they get away with lending money to everyone whoever is willing to pay the interest?

Relationship Between Over-Collateralized Debt and Liquidation

There's one important concept that we should mention if we're talking about over-collateralization and that is liquidation. In this context liquidation refers to the action of turning the collateral at hand into the debt has been given away. Liquidation is the point where the lender is sure that the borrower won't pay their debt and takes action to secure their money given away as debt.

Several Strategies To Sell The Collateral

Compound uses the later strategy in order to pursue full decentralization but we'll use the first one in our protocol since Agoric has its own native AMM.

One other cool feature of Compound Finance is that its rates, whether it is the exchange rate between the underlying asset and the cToken or the interest rate charged on every debt, are dynamic. Meaning they change in response to current market situation. This is good because it enables the market to balance itself and not run out of liquidity.

There are three important rates for Compound protocol;

Below are the formulas for those rates;

You can take a look at the markets listed in the Compound protocol if you wish to see how these variables are used in real life.

You can check the Compound Whitepaper for more information.

For the implementation you can see Compound Protocol Repository on GitHub.

Pool Based Lending Protocol On Agoric

After some context we are now ready to talk about our version of a pool based lending protocol. Before we dive in you'll need some prerequisites in place;

You might also want to check out this documentation guide to have roadmap for more all around information.

The complete code for this protocol can be found in this repo. Essentially, a user is able to do five main operations in our protocol;

Functionality for these operations is distributed among multiple components. An high level overview of protocol components can be found below. 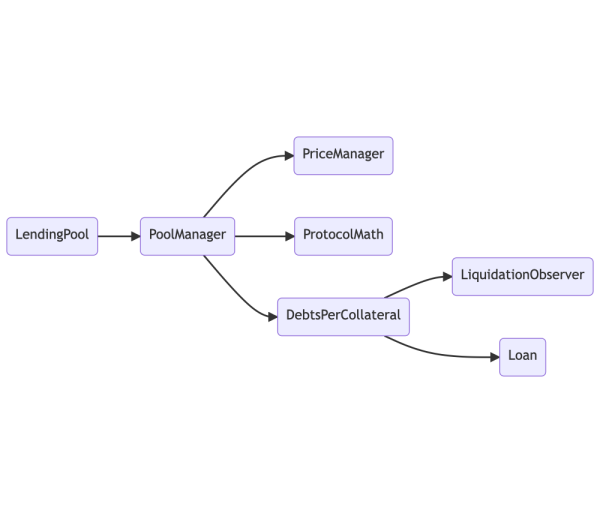 Entry point to the protocol. Points users to the correct pools after doing necessary checks. See the code.

The module we implement the formulas for exchangeRate, utilizationRatio and borrowRate. See the code.

Our pools accept multiple types of protocol tokens as collateral. In order to group loans with the same collateral type and same debt type we use this module since they'll behave similarly in response to changes in the market like when to trigger liquidation. See the code.

The main module for giving out loans. Enables users to execute adjustBalance, closeLoan transactions. Also notifies dapps about its state. See the code.

Every debtsPerCollateral module has this module observing price changes in order to trigger a liquidationOperation in case some loans get underwater. See the code.

A simple but powerful example of an interaction with our protocol can be the scenario where a user deposits money into a pool. Diagram below can help you understand what an end-to-end interaction would look like. 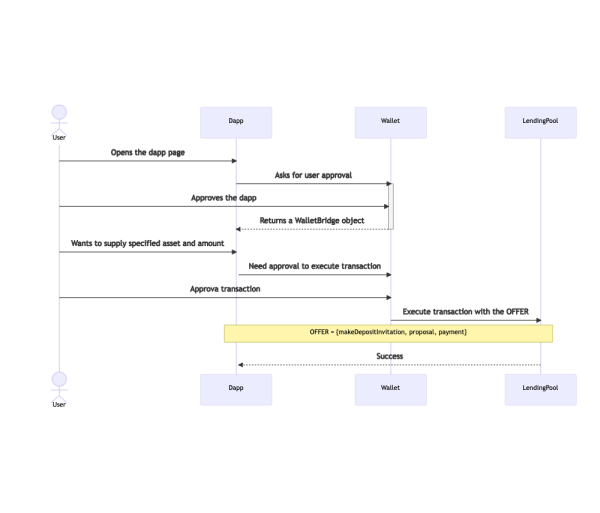 You need to have the below dependencies in order to build and use the agoric-sdk.

We first need to clone the source code and build it in our local environment. A more detailed explanation about installation can be found in the docs, I'm just going over this briefly here.

Clone this repo any location you want in your machine

Add agoric binary to the path

Our protocol is built on the agoric-sdk beta branch so the version should be 0.15.0

Get the code and checkout the blog/bytepitch branch.

In Agoric there are two types of local test chains; a sim-chain and a local-chain. A sim-chain, simulated chain, is where we can test our dapps and contracts but there's no transaction cost. So it's simulated, not real. On the other hand there's a local-chain which is based on the cosmos-sdk, therefore it's based on GoLang. Starting a local-chain requires building some go packages. If you plan to test with multiple clients interacting with the same chain, local-chain is the way to go. Check this page for further information.

Go to dapp folder and start the sim-chain;

Leave that terminal running and open a new one;

A Word On Deployment

agoric deploy can accept multiple scripts as arguments and runs them in the order of passing. Here we pass two scripts;

Once the deployment is done, start your wallet ui;

This command should open a browser automatically. Then open a new terminal and start the client ui;

Interact With The Dapp

To interact with the dapp, you mast approve it in your wallet. Go to your wallet and approve the dapp. Then go to localhost:3000, you should be able to see something like below; 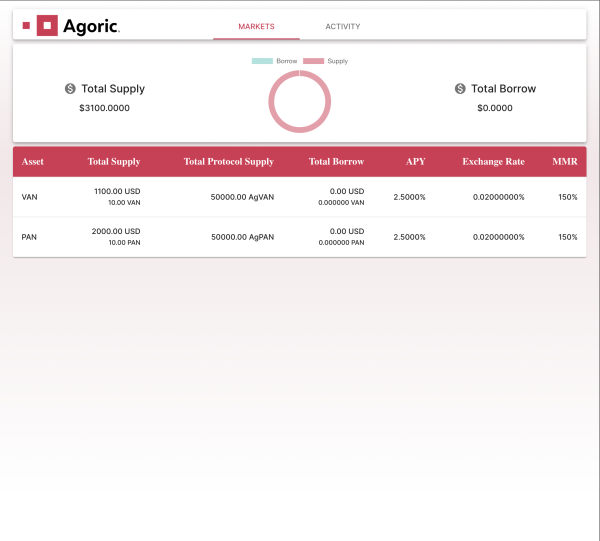 We have two main tabs in our app;

Above screenshot belongs to the 'Markets' tab. Most of the data displayed there is self-explanatory here is some explanation for the ones that are not;

If you switch to the 'Activity' tab; 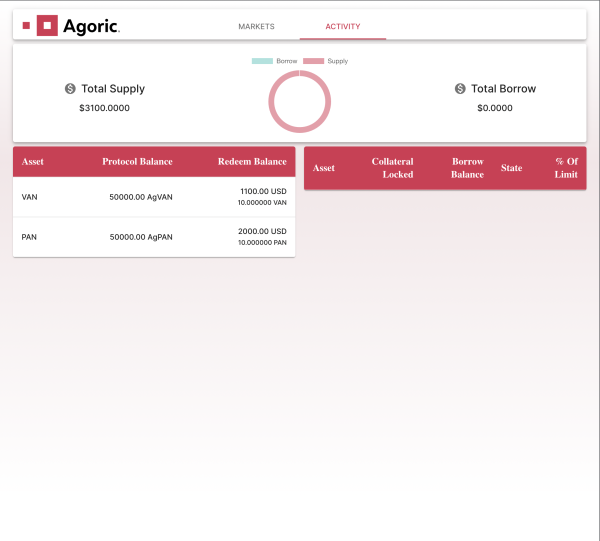 Here we list the supplied assets and borrowed assets per pool.

As I mentioned in the section about deploy scripts, we bootstrap the protocol with some liquidity already pushed into it. That's why deposits side not empty.

I'll walk you through a full scenario where full functionality of the protocol where a user(you);

You might notice that the numbers you see in supply screenshots is inconsistent with rest of the screenshots, that's because I took them out of sync from the rest of the sequence.

Click on VAN market and below dialog should open 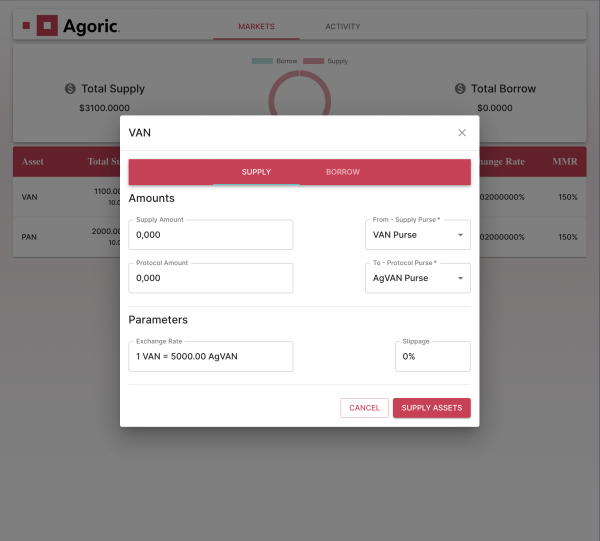 Here, enter the amount you wish to supply and the protocol token you'll receive automatically be calculated, you can also specify slippage rate to protect your transaction from the sudden price changes of the market.

Then go to your wallet and approve the below offer; 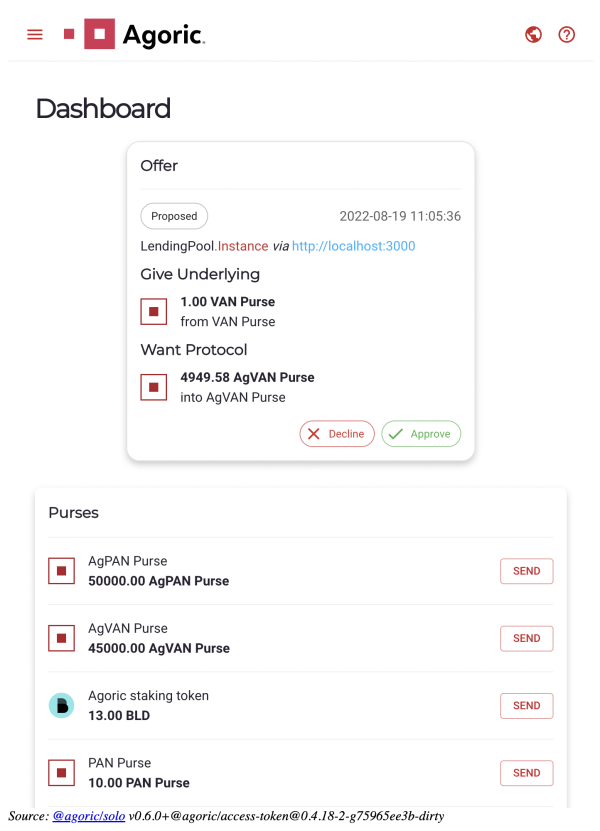 Click 'Approve' then wait for the numbers in the purses change. Here we should care about VAN and AgVAN purses. Below is before transfer; 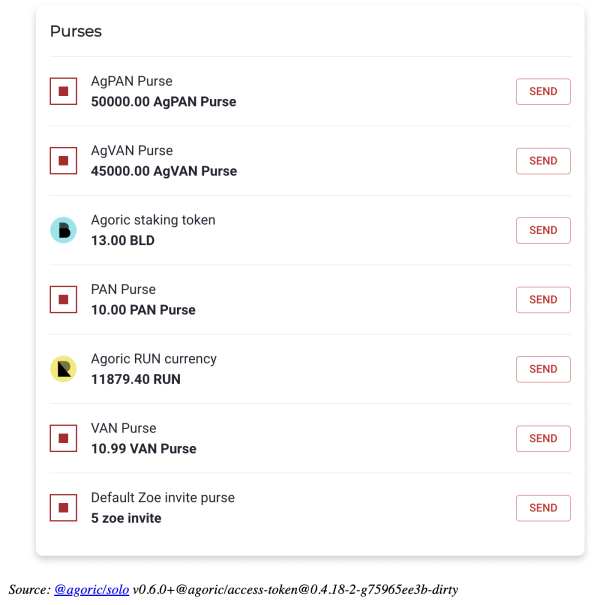 And this after the transaction; 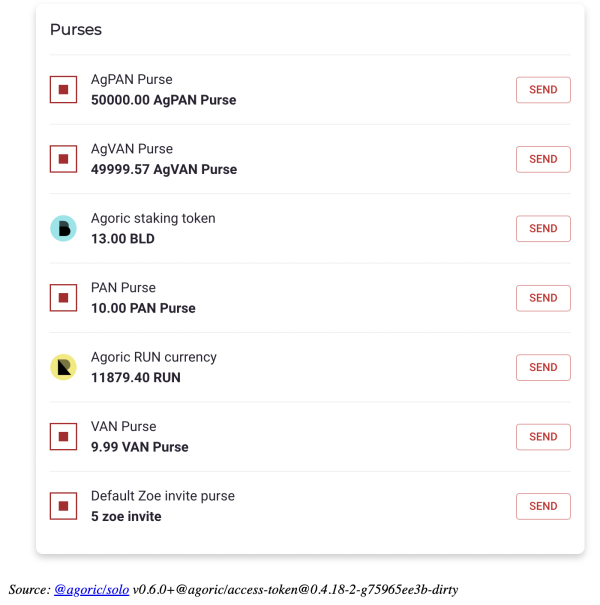 Let's borrow some VAN. Click on VAN market and switch to the 'Borrow' tab in the dialog. Then enter how much you want to borrow; 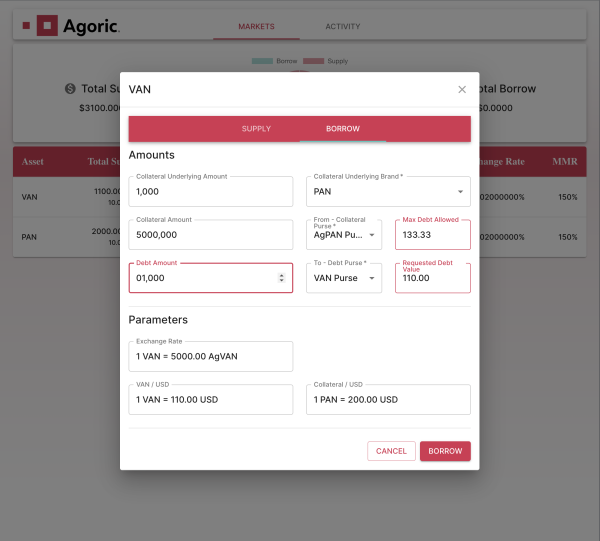 Go to your wallet and approve the transaction once you hit 'Borrow'; 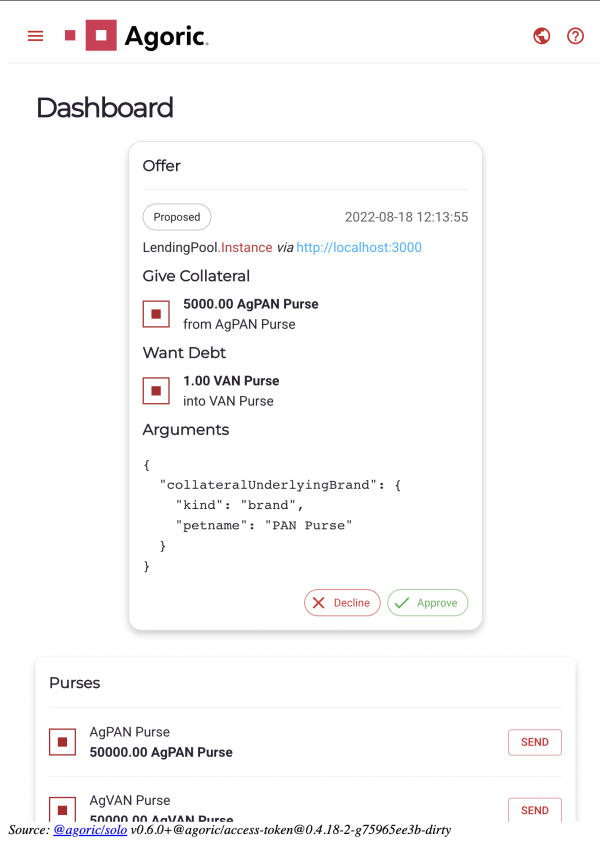 Purses will change from this; 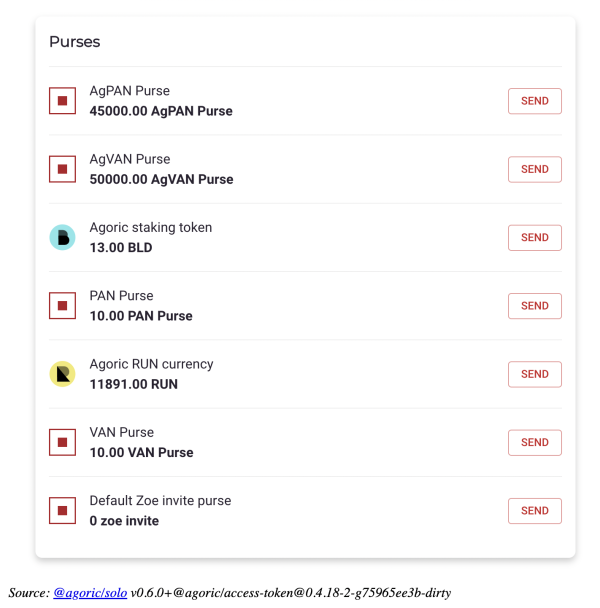 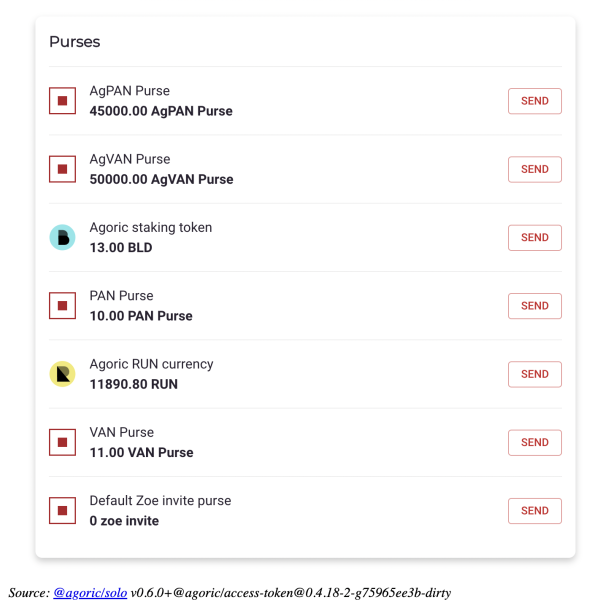 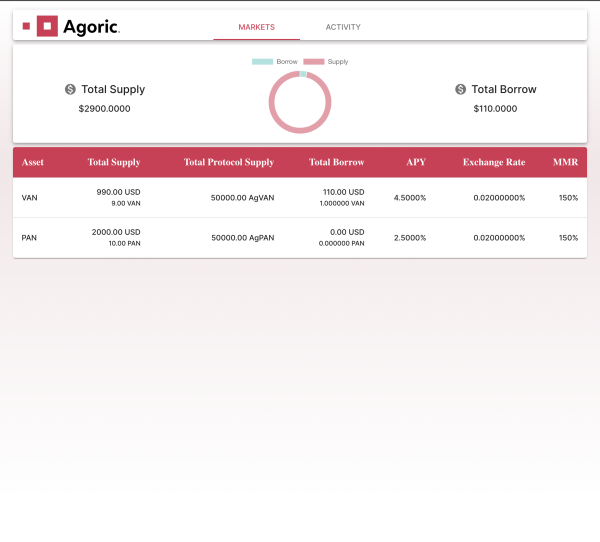 You can now view your loans in the 'Activity' tab; 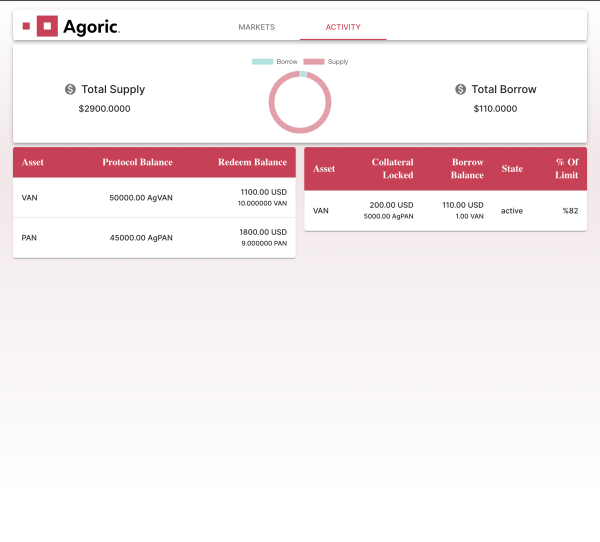 Notice that the exchange rate did not change because there's no interest accrued yet. So let's accrue some interest.

From the below screenshot you should notice that total borrows for both market and user profile is increased and also the exchange rate for VAN market is Increased also. 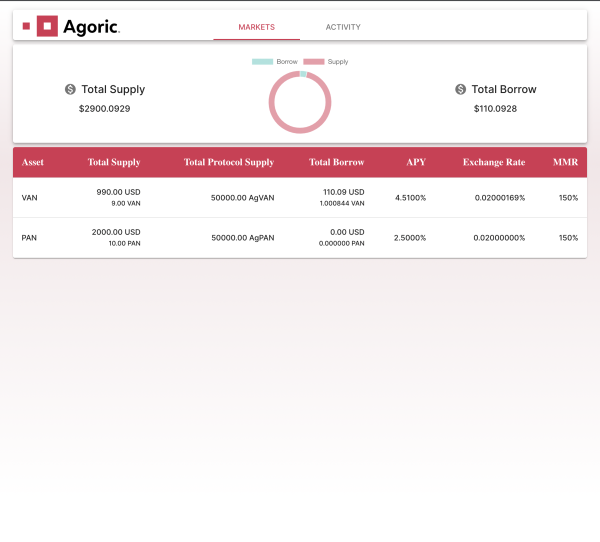 You can see that current debt for the loan is increased in 'Activity' tab also; 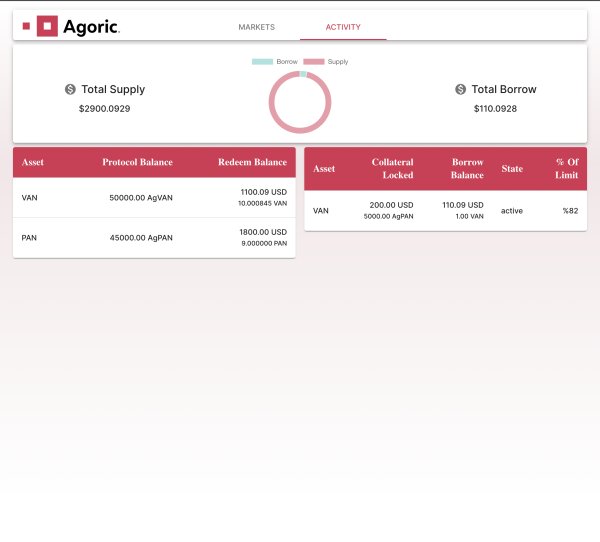 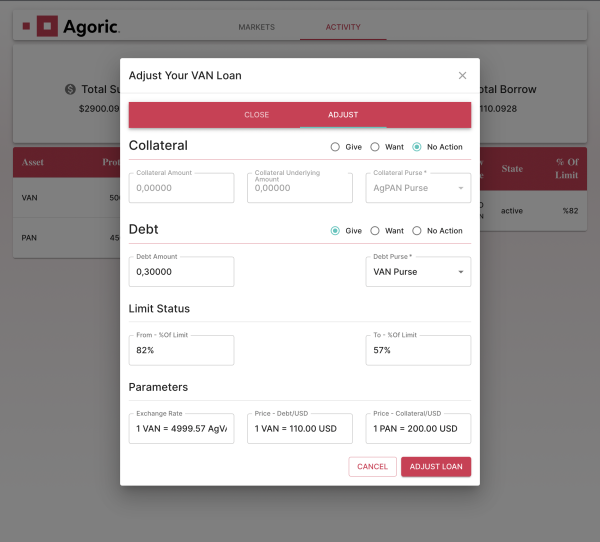 Again, go to your wallet and approve the below transaction; 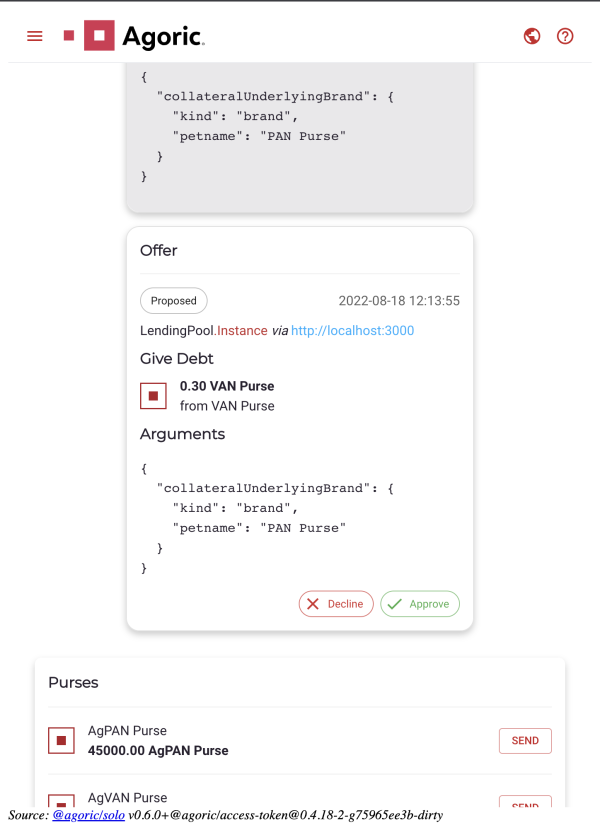 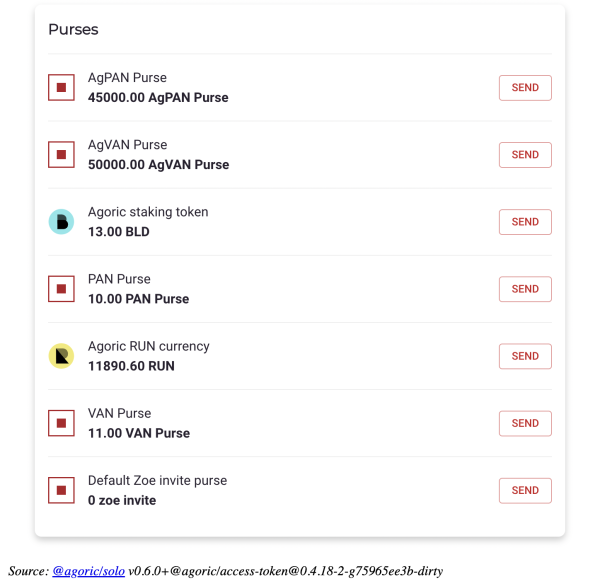 In the 'Activity' tab you can see that the 'Borrow Balance' for your loan is decreased and '% Of Limit' is also updated;

Now let's close our loan by paying all the remaining debt receiving the collateral we first put. Go to 'Close' tab in the loan dialog; 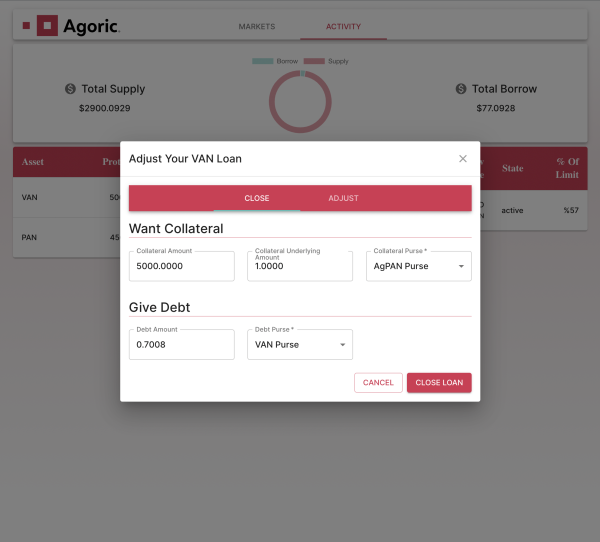 Go to your wallet approve the below transaction; 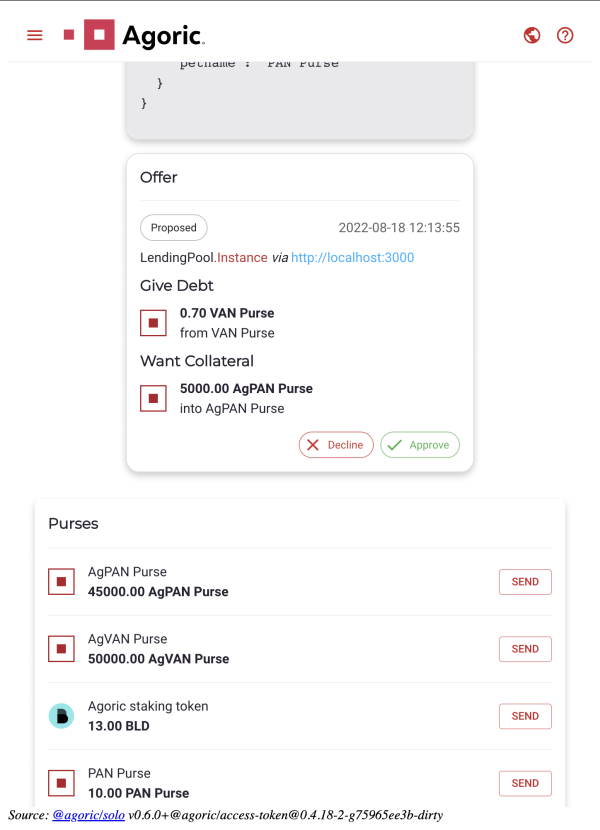 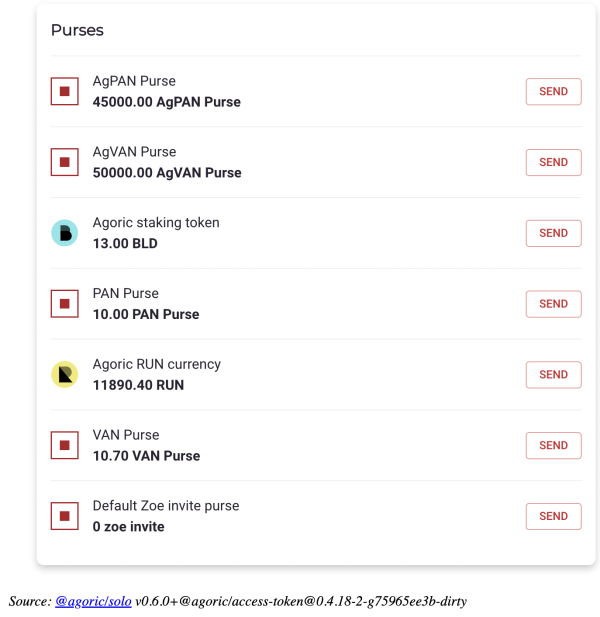 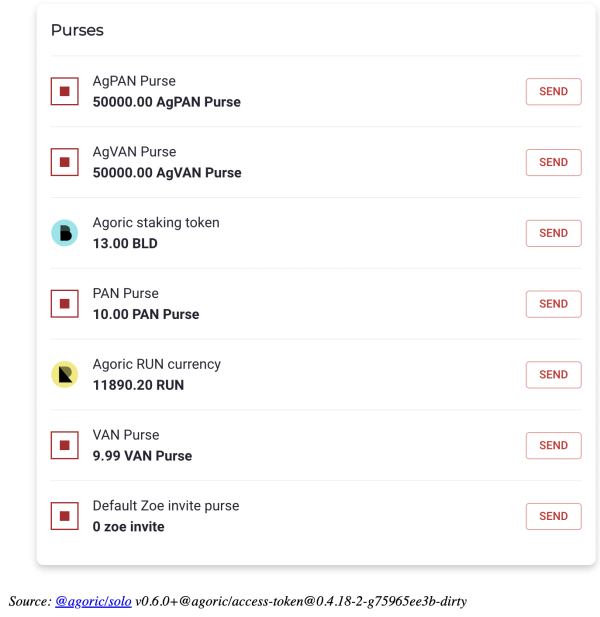 In the 'Activity' tab you can see that your loan is gone and your 'Total Borrow' is now $0; 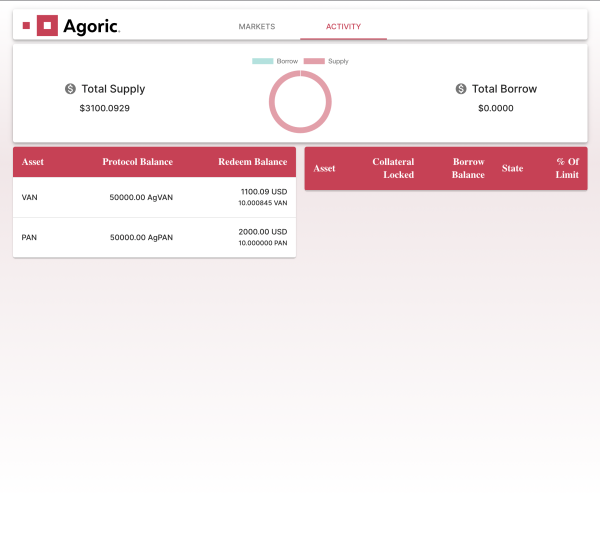 Now click on your VAN deposit on the left side of 'Activity' dialog. Below dialog should pop; 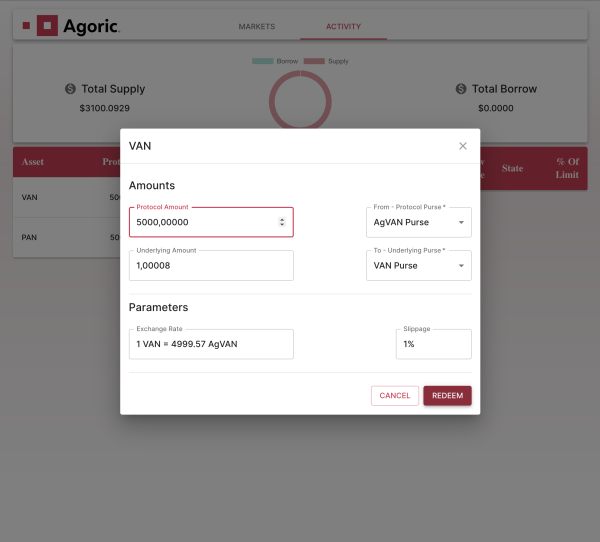 Now go to your wallet and approve the transaction; 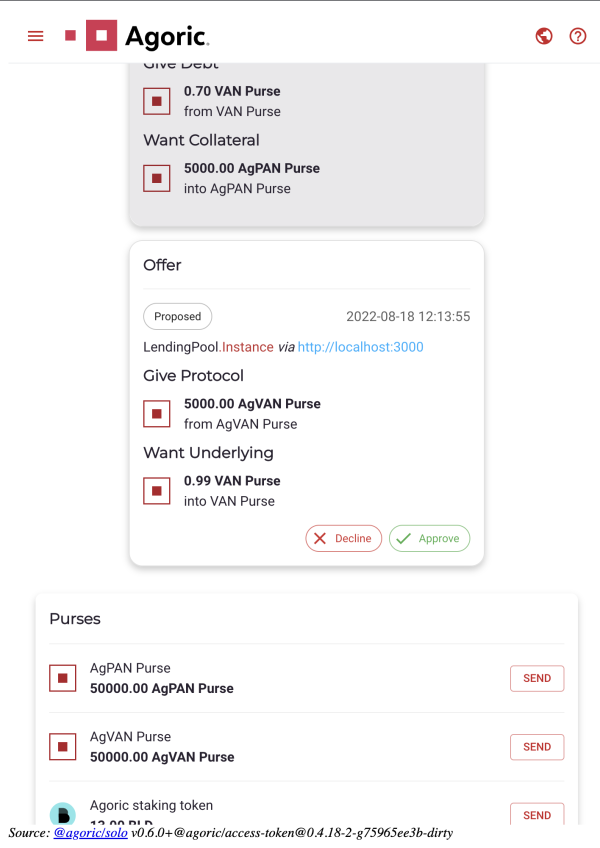 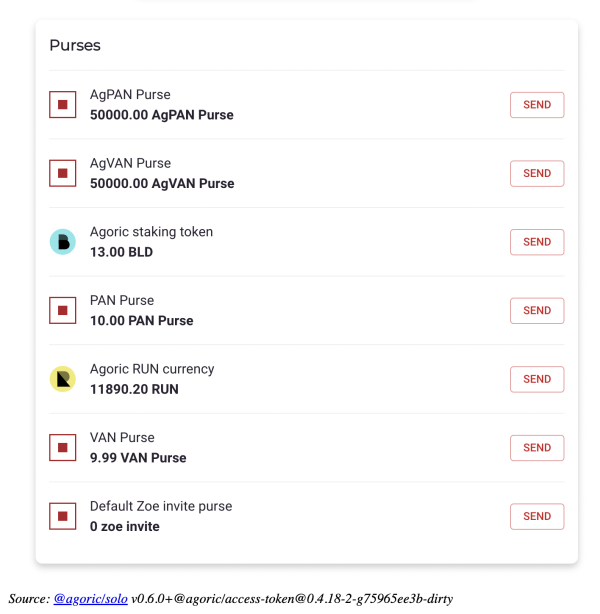 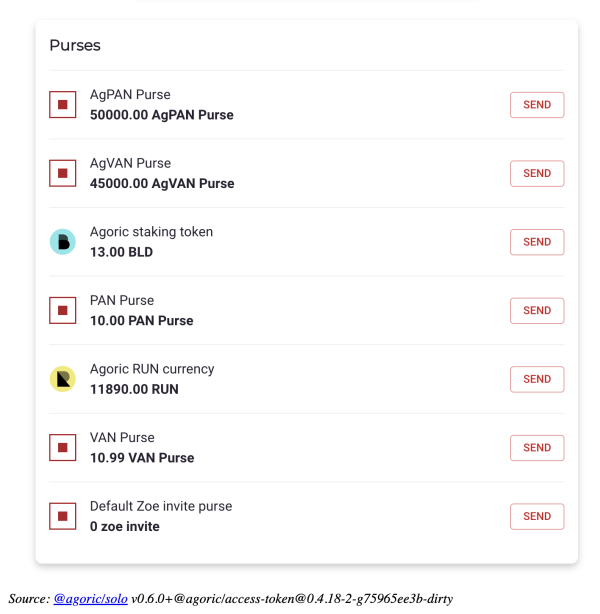 The following questions were answered in this article:

I hope this article was helpful. Feel free to share your comments and questions in this issue. Thanks for reading. Until next time, take care!